Titusville Council on the Arts’ Concerts in the Park are held Monday nights during the summer in Scheide Park from 7-9 p.m. Genres range from folk to rock and performers are both local and from beyond the tri-state area.

Titusville Council on the Arts also hosts the annual Titusville Folk & Bluegrass Festival (formerly known as the Heart of the Arts Folk Festival) each summer with a weekend of live music, art, dance, workshops and jam sessions for all ages.

Oil City hosts a monthly Transit Concert Series in the historic National Transit Building and weekly Karma Concert Series at Karma Coffee Co. during the cooler months. Free outdoor concerts include Music on the Square, held once a month throughout the summer in the Town Square at the corner of Center and Seneca streets, Pipeline Alley Concerts, taking place on Wednesday at the National Transit Building, and during community festivals such as Oil Heritage Festival (July), BridgeFest (August), and O.C.toberFest. 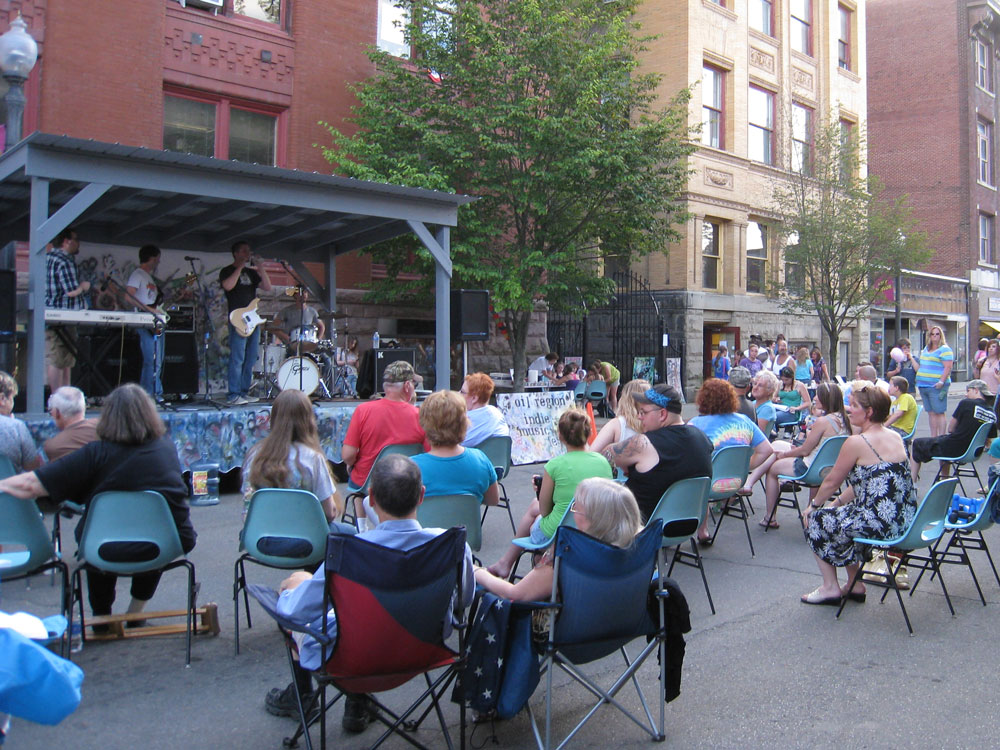 Live music is also a big part of First Night Oil City® which is celebrated every New Year’s Eve. Each year has a different theme to add to the fun.

Bandstand Park in Franklin is the site of free concerts every Thursday in summer and the Taste of Talent vocal competition.

The annual Oil Country Bluegrass Festival (organized by the Oil City Arts Council and CASA of Venango County) provides a mid-winter jamboree of local and regional bluegrass performers in the Oil City area each February. 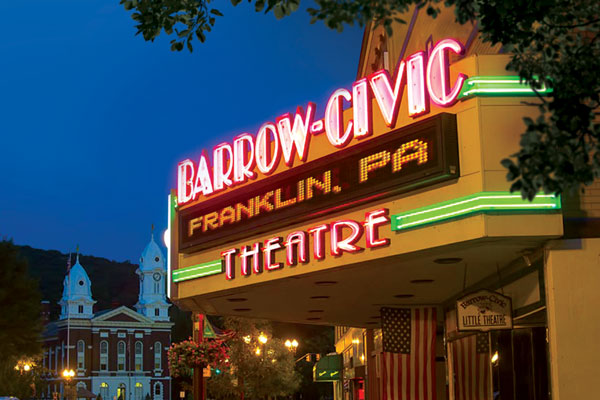 Twice a year (Labor Day and Memorial Day weekends), intrepid theater buffs get together to put on a show –in only 24 hours– known as Red Eye Theatre.

Everyone who auditions is cast in one of several original plays, which are written from 11 p.m. to 7 a.m. by volunteer writers. From 8 a.m. to 6 p.m. the actors must learn their lines and stage cues with the help of volunteer directors, as well as receive costumes and props. At 7 p.m. the plays are then performed on the Barrow stage for a paying audience. 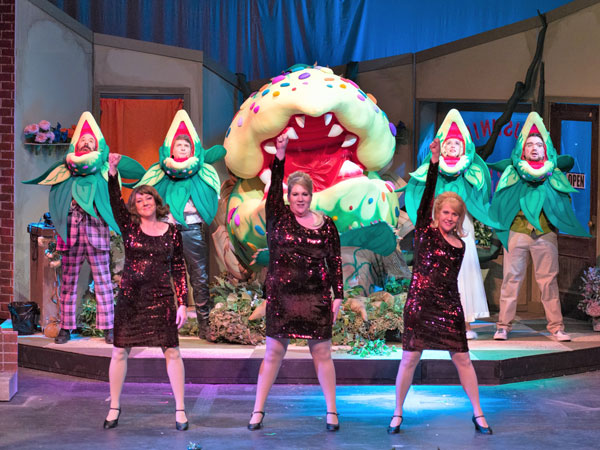 Oil City Community Playhouse produces quality dramatic productions with local talent, and is working to restore the Lyric Theatre to its former glory.

Emlenton’s Crawford Center, a former school, hosts an assortment of performances in its auditorium.

Old Liberty, the Galleria at Olde Liberty and Boutique Malo in Franklin offer work by local artists and craftspeople.

The Chicken Coop — Studio 306, inside the Crawford Center in Emlenton, was founded as a space for local artists to create and share their work. Monthly workshops and events are also held here.

The Red Brick Gallery and Gift Shop in Foxburg provides an inspiring venue for local artisans to display and sell their work.

The Nature Art Showcase and Sale coincides with Franklin on Ice, the ice carving competition held each February in Franklin. The showcase is a collection of original art depicting regional landscapes, wildlife and other natural themes produced by area artists. The exhibit takes place in the lobby of the Barrow Civic Theatre on Liberty Street. Many of the pieces displayed are also available for sale.

Each of the six libraries within the Oil Region also have a diverse array of artwork in their collections. These include:

As if the stunning architecture of the Oil Region weren’t enough, we also have some excellent public art in the form of murals, sculptures and some amazing stained glass by Louis Comfort Tiffany. 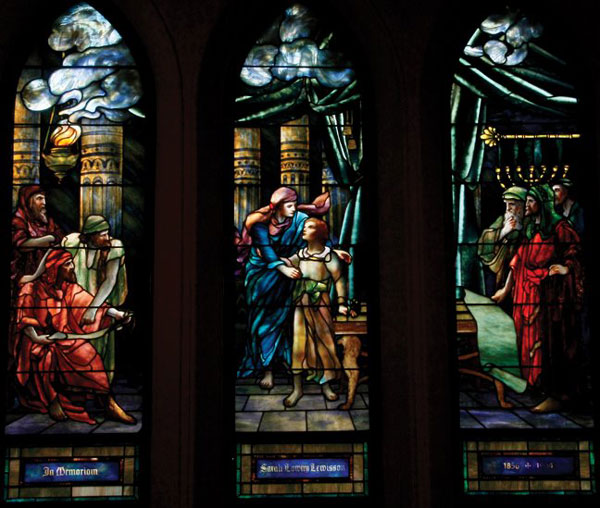 Much of our art tells the history of our communities. Some, like the life-size bronze statue of Chief Cornplanter in Oil City highlight an individual. He was rewarded for his aid during the Revolutionary War. Others commemorate sacrifice, such as the second oldest Civil War monument in the state, which stands outside the courthouse in Franklin. And some celebrate our past and present, like the mural at the corner of Spring and Franklin streets in Titusville.

The Oil City Downtown Murals initiative, launched by the Oil City Main Street PRogram in partnership with the Oil Region Alliance, has resulted in eight mural projects (seven new and one refurbishment) since 2016, bringing splashes of color in various themes to exterior walls in downtown Oil City.

St. John’s Church at 1145 Buffalo Street in Franklin houses a full set of Tiffany Windows, which are available for guided tours. All proceeds from the tours support the Tiffany collection conservancy and the Shepherd’s Green Community Food Pantry. Contact the parish office at 814-432-5161 for more information. There are also several Tiffany Studio stained glass windows in the Christ Episcopal Church located at 16 Central Avenue in Oil City, as well as in the St. James Memorial Episcopal Church located at 112 East Main Street in Titusville.

Drake Well Museum and Park may be the most notable location in the Oil Region since it commemorates the exact location of the first commercially successful oil well. The museum and grounds celebrate “the valley that changed the world” by showcasing the ways the discovery of oil impacts every day and every life since August 27, 1859 as well as exploring the future of energy production and its effects on the environment. For details on museum hours, admission and more, please visit www.drakewell.org.

DeBence Antique Music World in downtown Franklin houses a collection of more than 100 pieces of antique mechanical musical instruments from the mid-1800s to the 1940s including a calliope, carousel band organs, music boxes, nickelodeons and orchestrions. The collection was privately held by a Franklin-area couple before it was sold to a nonprofit organization formed to save and display it. The museum is open regular hours April through October and by appointment November through March. For complete details, including admission costs, please visit this website. 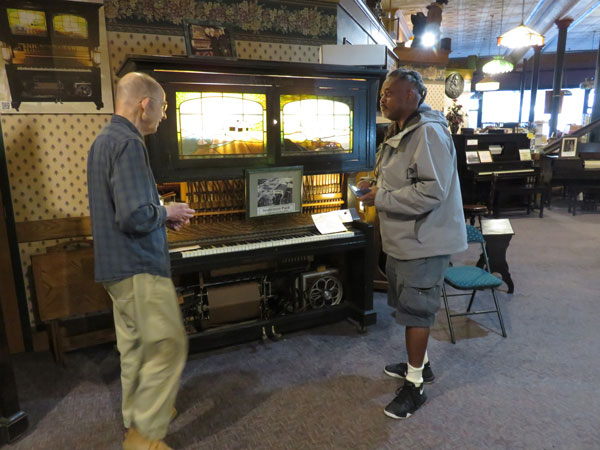 Venango Museum of Art, Science and Industry collects, preserves and exhibits artifacts and material relevant to the interests of Venango County residents and visitors in the grand 1905 Beaux Arts building. Exhibits include Rattlesnake Pete’s Shop, Latonia Theatre, Public Watchdogs, Asphalt Nation, and the Great Flood and Fire of 1892. An Oil Region Visitor Center is also housed inside. 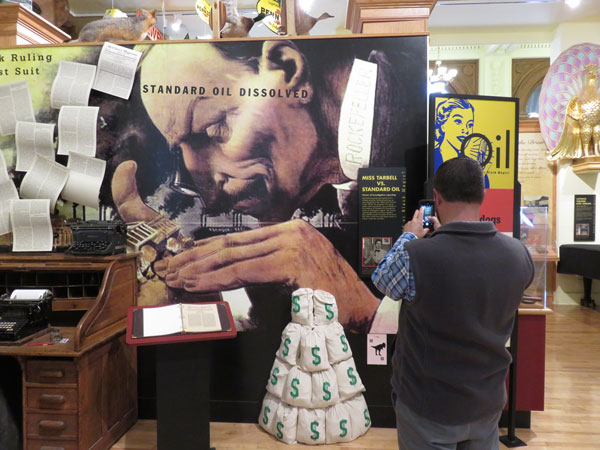 The museum is open April through December, Tuesdays through Sundays 10 a.m. to 4 p.m., but calling ahead is encouraged. There is a cost to visit the museum. Details are available here.