Below is a list of restaurants and bars in the Oil Region excluding the national chains you expect.

Grocery and convenience stores have lots of to-go items to pack for that hike, float or picnic. And, us Western Pennsylvanians are also spoiled by extensive 24-hour made-to-order food options at certain gas stations. Don’t knock it until you’ve tried it. It’s a pretty quintessential part of the experience.

As is ham loaf. Yeah, ham loaf. It’s meatloaf made with ham instead of beef, and it’s a pretty big deal around here. You’ll find it on restaurant menus, advertised on roadside signs and available at shops, butchers and farmers markets for take home cooking.

There are good Polish dishes like pierogis and Pennsylvania Dutch inspired fare available in addition to the usual Italian, burgers and pizzas.

We get kind of particular about sandwiches in these parts. Some swear by the Ropp, a salami, pepperoni, mozzarella and hot pepper submarine sandwich at Pasquale’s in Titusville. For others, wedgies are where it’s at. These submarine sandwiches can contain a variety of toppings between two pizza crusts rather than a roll, but they are still more like a sub than a stromboli or calzone.

We’re close enough to Pittsburgh that a lot of our salads come with French fries on them. Why not?!

Treat your sweet tooth to locally made Clarks Donuts, sold at several locations throughout the region or hit up Warner’s Bakery for the legendary Smiley Cookie. Located next to Main Street Elementary School in Titusville, Warner’s Bakery was the after school snack stop of choice for many kids in the mid-twentieth century, including a would-be restaurateur, Jim Broadhurst. When he grew up and began working at the restaurant chain Eat ‘n Park, Broadhurst made a deal with the bakery to be able to sell their sugar cookies with the icing eyes and smiles. Now the iconic cookie is enjoyed by customers throughout Pennsylvania, Ohio and West Virginia, as well as by others throughout the world.

We can be health conscious and environmentally friendly, too. Shops like Core Goods in Oil City and community assisted agriculture (CSA) programs like that of Plot Twist Farms provide fresh, locally sourced ingredients.

Home grown food is popular. Fill up on sweet corn from roadside stands and farmers markets in late July. Apples, cider and pumpkins take over in the fall. Every September, eating local is celebrated at Farm to Fork, an outdoor multi-course dinner made with regional ingredients, wine and beer pairings and live music.

Food is always a big part of our celebrations. Find your fair favorites and all sorts of fried things and food on a stick by checking out our festival schedules. 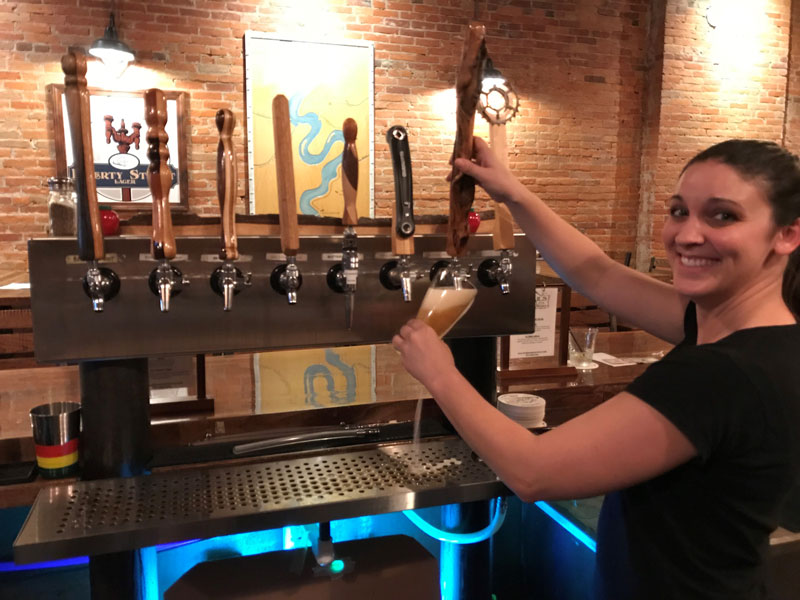 If you want home brewed booze, check out the area’s wineries and breweries.

If caffeine is more your craving, check out Bossa Nova Coffee Roastery in Franklin, Karma Coffee Company or Spilling the Beans Gourmet Coffee in Oil City, Harmon’s Cafe and Bakery in Titusville, and The Well Coffee House and Gathering Place in Pleasantville.

Is your Oil Region eatery missing from this list? Let us know (along with your address, phone number and a link) at info@oilregion.org, and we’ll add it.